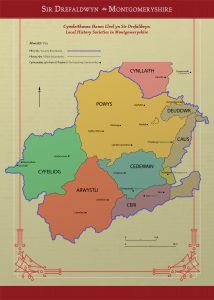 In 2015 for the first time ever there was a local history tent, Lle Hanes, at the National Eisteddfod in Meifod. Inside the tent were many colourful displays comprehensively illustrating the history of Montgomeryshire and the adjacent border area. In the central area was the display of the Powysland Club, the promoters of this project, together with a book stall and a large screen on which short visual presentations were continually projected As well there was an audio device playing recorded talks on local history.

Visitors were told that the Powysland Club was formed in 1868 and claims to be the oldest such county historical society in Wales. It publishes the Montgomeryshire Collections every year, as well as books about local history, runs a programme of lectures and excursions and has its own substantial and valuable library in Welshpool.

The exhibition was opened on the first day of the eisteddfod by Professor Sioned Davies, Professor of Welsh at the University of Cardiff. Sioned grew up in Welshpool, her father having been headmaster of the local primary school. The eisteddfod was open for eight days until the following Saturday, 8th August, and during the week attendance at the local history tent grew to about 7,000, as people heard about this new initiative. Many expressed their opinion that this was the best exhibition tent on the maes. 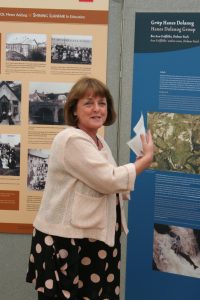 The Club was fortunate to have obtained the excellent services of Chris Delaney, a former County Museums Officer, as Project Manager to assist with the preparation of this exhibition. The Club and other organisations were also fortunate to have secured the support of the Heritage Lottery Fund. All those taking part would like to put on record their appreciation of the generous support given by the Heritage Lottery Fund without which the project could never have taken place.

Lle Hanes 2015 was accounted a great success and should provide a model for future presentations at eisteddfodau. Thanks are due especially to Carrie White and David Hall for their leadership and to all the volunteers who gave their time and effort so generously. We are also grateful to Rowena Wells, of Heritage Screenprint, Llanelli, for the excellent  digitization and presentation of the images supplied by the Local History Societies; a selection of the displays can be seen in the Eisteddfod Gallery.